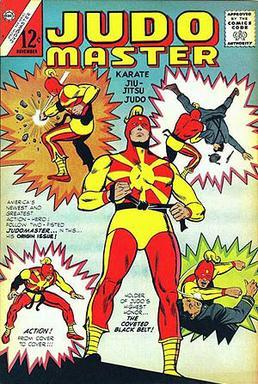 Judomaster was a Charlton Comics character created by Joe Gill and Frank McLaughlin who was later bought by DC Comics, under whom he became a legacy character with three successors.

Sergeant Hadley "Rip" Jagger was introduced in an intended one-shot in 1965 where he ended up as the only American survivor on a small island currently being overtaken by the Japanese in the Pacific Theater of WWII. He was rescued by a group of guerrilla fighters trying to push the Japanese military from their home island, who took him to their hidden base and taught him martial arts. He is given his costume and hero name by their leader after he starts helping them fight against the Japanese and manages to prove unbelievably adept at Judo, somehow surpassing his instructor in his short time training. Rip was brought back with his own self-titled ten-issue series due to popular demand where he picked up the Japanese-American kid sidekick Tiger, who later underwent a Heel–Face Turn and fought against his former mentor and other former Charlton heroes, who had banded together as L.A.W.. Rip was said to have been a member of the All-Star Squadron during the war and was killed by Bane in the Battle for Metropolis during Infinite Crisis.

The second Judomaster was introduced nine years later in 1994, where he helped the Justice League and befriended Guy Gardner. He remained a mysterious figure, never being seen out of costume and never having his secret identity revealed to the reader. His costume also took little inspiration from Rip's bright yellow and red spandex number, basing it instead on a simple gi. He was followed by Rip's son Tommy in 2006. Tommy worked for the American government as an agent of Checkmate and was also known by the code name White Knight.

The Japanese woman Sonia Sato became the fourth individual to adopt the Judomaster name and costume. While Sato was the first woman to use the title in the main DCU, a woman greatly resembling her had previously been depicted as the Judomaster in the Kingdom Come Elseworlds tale. She chose to become a vigilante to fight her father's murderers and as recompense for her father's criminal activities. Sato was an ally of the Birds of Prey who later became a member of the JSA. In the New 52's Earth 2 reality, she is a high-ranking official in the World Army rather than a costumed hero or vigilante.

Judomaster made his live-action debut in the DC Extended Universe in James Gunn's Peacemaker portrayed by Nhut Le, on HBO Max.