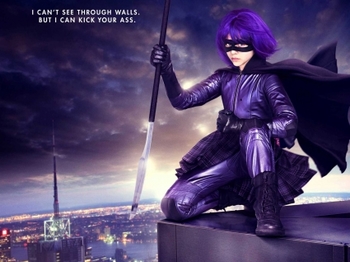 She doesn't need powers to kick your ass.
"Well, well. You took my advice about theatricality a bit... literally."
— Ra's al-Ghul to Batman, Batman Begins
Advertisement:

We all know this type of guy. He wears an unusual outfit and shows up to fight villains or monsters. He's probably got a Secret Identity and a mild-mannered alter ego to keep his private and crimefighting life separate.

Sounds like a Superhero, right? He probably will get called that, too. But in this case, he hasn't got any superpowers. He's probably an expert fighter, sure, and he may have all sorts of gadgets or other unusual advantages, but there's nothing more superhuman about him than perhaps unrealistically good human skills or abilities. (Being good at it isn't a requirement, though... just highly preferable for survival.) So he's a Non-Powered Costumed Hero.

The character is probably Super Weight Class 1 (unpowered but formidable), although they could be lower if they're just, you know, bad at what they do. They tend towards being The Cowl. The Proto-Superhero is likely to be this, as many pre-date the assumption that superheroes needed special powers.

The actual type of costume varies but may involve Cool Mask, Coat, Hat, Mask, Badass Longcoat, Superheroes Wear Tights, and/or Superheroes Wear Capes. Due to the nature of the trope, tropes about superheroes wearing stuff usually apply here too.

The trope is not about villains, at least not traditional ones (no Joker), but the character doesn't need to be "genuinely" heroic. As long as someone, even if just the character themselves, sees them as fulfilling the "costumed hero" role, that suffices. An Anti-Hero or Knight Templar could qualify.

Compare Real Robot Genre for the Humongous Mecha counterpart. Contrast with Clothes Make the Superman, where the character becomes powered when wearing the costume. See also Crimefighting with Cash.