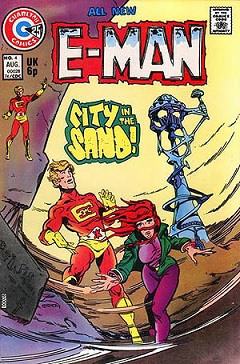 E-Man and his partner/significant other Nova Kane.
E-Man is a comic book Super Hero created in the 1970s by Nicola Cuti and Joe Staton for Charlton Comics.
Advertisement:

Long story short: E-Man started out as a packet of pure (sentient) energy born from the explosion of a nova. On Earth, this energy discovered that it could change itself from energy to matter (lampshaded by Albert Einstein's formula: E=mc2, which became his Chest Insignia), enabling said energy to assume human form. Befriending one Nova Kane (née Katrinka Kolchinzski), an archeology student at Xanadu University who works part-time as an exotic dancer, the energy man from space decided to live on Earth using his shape-changing and energy blasts to fight evil as E-Man.

Not to be confused with He-Man.