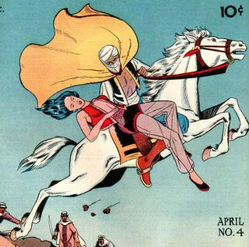 El Kuraan is a Superhero from The Golden Age of Comic Books, published by Rural Home Publishing, whose sole adventure was in Red Circle Comics #3.

Jahn is the son of the chief of the Santar tribe. An American strikes oil near the area, and buys the land off of a corrupt official. This official promises to pay the tribe to move, but secretly plans to pocket the cash and drive them off the land. Jahn becomes masked adventurer "El Kuraaan" to get his people's land back.

This comic contains examples of :