Occupiers Out of Our Country 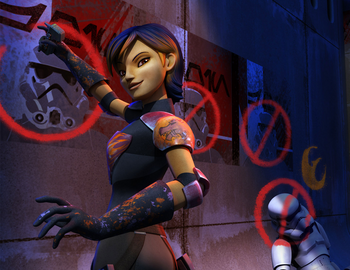 She loves defacing the face of the fascists.
"None of you belonged on Bajor. It wasn't your world. For fifty years, you raped our planet, and you killed our people. You lived on our land and you took the food out of our mouths, and I don't care whether you held a phaser in your hand or you ironed shirts for a living; you were all guilty and you were all legitimate targets!"
— Kira Nerys, Star Trek: Deep Space Nine episode "The Darkness and the Light"
Advertisement:

Sometimes, when writers feel the need to avert Terrorists Without a Cause, they use this stock motivation, where the members of a guerrilla/insurgent/terrorist/freedom fighter/resistance/etc. movement and/or organisation justify their actions by claiming they want foreign occupiers to leave their nation. This is both Truth in Television and Older Than Feudalism, dating at least back to the 1st century BCE with the Sicarii zealots in Roman-occupied Judea.

A rather peculiar case of this trope occurs with some Animal Wrongs Groups, who claim humans are occupying the Earth despite the fact that humans also originate on Earth.

Compare to its sister trope, War Comes Home, which is the event that leads up to this scenario existing as a homeland is attacked and eventually conquered by a neighboring power, but it can also be the consequence when the liberation of your home leads to another attack from either the same regime or from an opposing one trying to do what they did.

If the characters are in La Résistance, they may also invoke this trope and eventually play this straight.

Compare Your Terrorists Are Our Freedom Fighters, a trope about moral grayness applicable to this motivation.