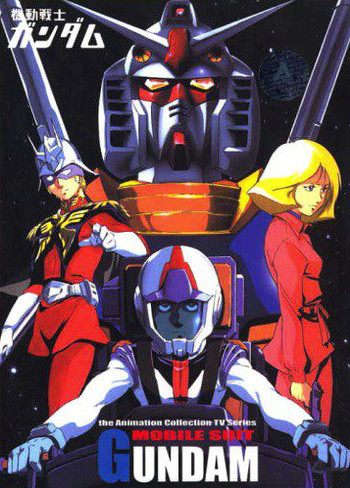 I pray, pray to bring on the new day
"It is the year 0079 of the Universal Century. A half-century has passed since Earth began moving its burgeoning population into gigantic orbiting space colonies. A new home for mankind, where people are born and raised... and die."
— Opening Narration
Advertisement:

Mobile Suit Gundam (Kidou Senshi Gundam, lit. "Mobile Soldier Gundam") is the original Gundam show, created by Yoshiyuki Tomino. It started in 1979 as a planned 52-episode series, but it was cut down to 43 due to the show pulling in horrible ratings.note Actually cut down to 39, but the producers managed to bargain for a one-month extension to actually finish the story. However, the merchandise for the show sold rather well, allowing the series to go straight into syndication, where it found its audience. A largely reanimated Compilation Movie trilogy successfully convinced the people with the money to further develop the series, and Mobile Suit Gundam eventually spawned a massive franchise.

The series takes place in the year 0079note read as "double oh seventy-nine" of the Universal Century, during a war between the Earth Federation that governs Earth and most of the space colonies and the Principality of Zeon, a group of colonies that declared independence from the Federation. Despite coexisting more-or-less peacefully for years, Zeon launched a surprise attack using their devastatingly effective new enormous humanoid combat vehicles known as mobile suits, catching the Federation completely off guard, decimating the Federation's military and then proceeding to wipe out half of humanity with a combination of nerve gas, nuclear weapons, and intentionally deorbiting a space colony as a makeshift Orbital Bombardment. When this failed to bring the Federation to its knees, Zeon follows up by invading Earth.

Months later, after the war has dragged into a stalemate, the Federation is testing a new warship (an assault carrier named the White Base) and a highly advanced mobile suit known as the Gundam when they come under attack by a small Zeon force. Local resident Amuro Ray, an Ordinary High-School Student, ends up Falling into the Cockpit and piloting the Gundam to fend off the Zeon attack. With most of the Federation staff killed during the battle, Amuro and a group of surviving locals are forced to crew the White Base themselves in order to survive.

From there, this unlikely group journeys across Earth and space, going up against the Zeon forces and a variety of enemy Ace Pilots arrayed against them, in a classic series that is both a war drama and a Coming-of-Age Story, focusing simultaneously on the horrors of war and the gradual maturing of its teenage cast from frightened, desperate children simply fighting to survive into a tight-knit crew of Unlikely Heroes who manage, through skill, luck, and determination, to change the course of the One Year War.

The original Real Robot series, Mobile Suit Gundam literally created a genre, and eventually spawned an entire franchise. There an accompanying novelization and the first post-series production was three compilation movies. Mobile Suit Gundam: The Origin is a manga reimagining.

Mobile Suit Zeta Gundam was a direct sequel and continuation of a new conflict after the One Year War, with Mobile Suit Gundam ZZ and eventually Mobile Suit Gundam: Char's Counterattack concluding the overall stories of characters introduced in this series. There are several OVAs and one ONA set in the same time period during the One Year War: The 08th MS Team, Gundam 0080: War in the Pocket, MS IGLOO, and Gundam Thunderbolt. More details can be found on the Gundam franchise page.

The show's production itself was comically fictionalized in Gundam Sousei.

Who will survive?.
Feedback

Most episodes of Mobile Suit Gundam open with a short history of the Zeon's declaration of independence, and their war with the Earth Federation.

Most episodes of Mobile Suit Gundam open with a short history of the Zeon's declaration of independence, and their war with the Earth Federation.