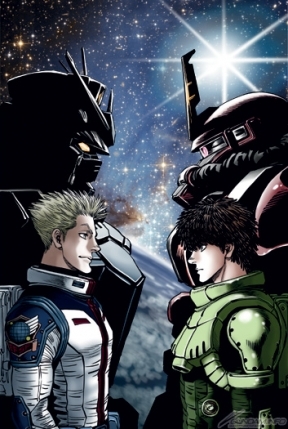 Tears of sadness and the tears of joy. After crying it's all the same...

"This is Thunderbolt Sector, no border no war!"
Advertisement:

In 0079 during the One Year War, Moore Brotherhood, once citizens of thriving colonies in the past, fight to reclaim their homeland with their effort backed by the Earth Federation. As the main front moved closer to A Baoa Qu, Thunderbolt Sector became more important than ever for the Zeon forces protecting the supply lines to the headquarters. In the middle of it all, charismatic and talented Ensign Io Fleming of the Brotherhood and calculating sniper Chief Petty Officer Daryl Lorenz of Zeon's Living Dead division, two young hotshots with drastically different music genre of choice and personal drive, became embroiled in a war not entirely their own.

A 4-episode Original Net Animated Adaptation, produced by Sunrise, premiered on December 25, 2015 via pay to watch service in Japan, with early access from the Gundam Fan Club app service on December 11, 2015 and ended in April 8, 2016. The first episode was streamed outside Japan for a limited time from December 25, 2015 to January 7, 2016. A Compilation Movie was released on June 25, 2016. A second season of the ONA was also released on March 24, 2017, with a compilation movie of that released in November 2017.

"When you hear jazz, it'll be your exit music."