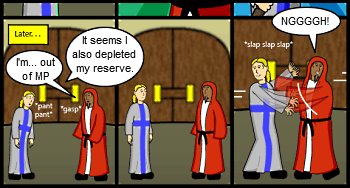 Oh, if only they brought a Mana Potion.
Advertisement:

When a fight lasts a long time, often a very long time, things can get a bit... different. Elaborate sword duels can turn into bar brawls. A gunfight or mechafight becomes a fistfight. A long range exchange of sorcery or powers becomes an up-close and personal No-Holds-Barred Beatdown. Improvised Weapons start appearing. Things get brutal, or just plain silly, or even sad.

A common comedy variation is for a brawl between two grown men to devolve into a childish slap fight. When played for drama, use of this trope can evoke feelings of desperation and/or savagery as arsenals get depleted, weapons broken, and yet the combatants only tear into each other even harder with their bare hands.

Destructo-Nookie is one possible outcome. Contrast Interesting Situation Duel - a fight that is as complicated as Combat Breakdown is simple.