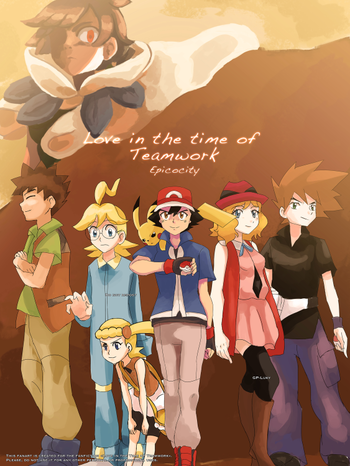 Love. Teamwork. The beginning of a saga.
Advertisement:

Once every seven years there was a tournament celebrating the bonds between people and Pokemon. Of course, Serena expected Ash to want to take part, but she had no idea the ways in which it would change their lives for good or ill. She was confident, however, that by the end of that week, something between herself and Ash would be different.

Official Summary for Love in the Time of Teamwork

The Ancienverse is an award-winning

series of Pokémon fan fictions by Epicocity, first published in 2016. Set within the continuity of the XYZ series of the anime (and, later, beyond), the stories are written in past tense and focus mainly on the characters Ash, Serena, Clemont and Bonnie, with some other characters as well from time to time. The fics, while having romance as a major subplot, focus heavily on action with some drama and suspense as well. The series was later split into two trilogies: The Kalos Trilogy, which were the first three books set in Kalos, after which, diverging from the canon anime entirely, and The Alola Trilogy which continues the events of the Ancienverse into the Alola region, before ending on the final set of fics called The Road to Tomorrow.

The The Kalos Trilogy, Love in the Time of Teamwork

, Love in the Time of Turbulence

, and Love in the Time of Tribulations

are set within the XYZ continuity, starting after A Watershed Moment (XYZ 15), wherein Ash and his Kalos friends take part in a tournament known as the Kalos Team Tournament. However, dark plots are brewing behind the scenes including the enigmatic Zinnia and (in later books) the mysterious and dangerous Team Neo and DARC. In the middle of this, Ash and Serena deal with their own blossoming romance as they try to put a stop to the plans to destroy their world. This series split-off from canon with Tribulations after XYZ 43.

On March 7th, 2017, a second trilogy (known as The Alola Trilogy) started with Love in the Time of Tropics

, following Ash, Serena, Clemont and Bonnie into the Alola region with a Truer to the Text Sun & Moon rewrite. It was preceded by a group of three oneshots.

Upon the conclusion of The Alola Trilogy, a final story and associated oneshots/threeshots began posting on October 31st, 2017, with the final story, Love in the Time of Tomorrow

The series entered a period of technical hiatus, with the story finished, but eventually returned in 2021 with a short story following Ash's battle with Diantha and the eventual Galar Trilogy, focusing on a new character, Gloria, as she seeks to become Champion of Galar under Ash's mentorship (this time co-authored with Viroro-kun).

During the summer of 2022, Epicocity published a prequel ("Book Zero") to the whole series, "Love in the Time of Trepidation". This story, set in the Hisui region, follows Akari's journey to learn what happened to her injured brother, Rei.

The completed list of stories in the Ancienverse are listed below (the flagship titles in bold):

The Ancienverse contains examples of: