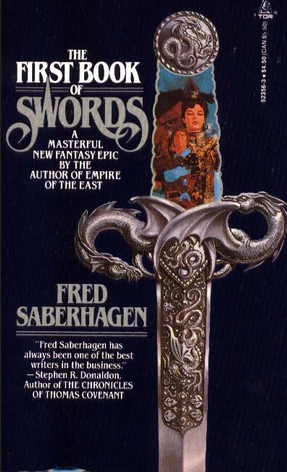 A series of fantasy novels written by Fred Saberhagen between 1984 and 1999. A distant sequel to his Empire of the East trilogy. The novels are as follows:
Advertisement:

The Gods decide to have a game. The playing pieces are humans, armed with twelve nigh-indestructible swords forged by Vulcan, imbued with unique powers.

Each sword is surgically sharp, perfectly crafted, and, as mentioned, nigh-invulnerable. Each also possesses a special ability unique to the sword. They may be identified by a symbol engraved in white upon their otherwise black hilt, or in the case of Soulcutter, a lack thereof.

Advertisement:
The Swords
Vulcan enlists a few humans to help with his creating, and when he's done, he uses the bodies of all his helpers, save one, to quench the blades. The one he spares, he cuts off his arm and leaves him with Townsaver. Life proceeds as normal, until the local lord decides he wants to have a look at this commoner's God-Forged sword.

At this point, the War for the Swords begins in earnest. All the high and mighty, rich and powerful people seek the various swords for themselves.

A commonly-known song describes the Swords, providing hints as to their powers and weaknesses, and goes thus:

THE SONG OF SWORDS

Who holds Coinspinner knows good odds
Whichever move he make
But the Sword of Chance, to please the gods
Slips from him like a snake.

The Sword of Justice balances the pans
Of right and wrong, and foul and fair.
Eye for an eye, Doomgiver scans
The fate of all folk everywhere.

Farslayer howls across the world
For thy heart, for thy heart, who hast wronged me!
Vengeance is his who casts the blade
Yet he will in the end no triumph see.

Whose flesh the Sword of Mercy hurts has drawn no breath;
Whose soul it heals has wandered in the night,
Has paid the summing of all debts in death
Has turned to see returning light.

The Mindsword spun in the dawn's gray light
And men and demons knelt down before.
The Mindsword flashed in the midday bright
Gods joined the dance, and the march to war.
It spun in the twilight dim as well
And gods and men marched off to hell.

I shatter Swords and splinter spears;
None stands to Shieldbreaker.
My point's the fount of orphans' tears
My edge the widowmaker.

The Sword of Stealth is given to
One lonely and despised.
Sightblinder's gifts: his eyes are keen
His nature is disguised.

The Tyrant's Blade no blood hath spilled
But doth the spirit carve
Soulcutter hath no body killed
But many left to starve.

The Sword of Siege struck a hammer's blow
With a crash, and a smash, and a tumbled wall.
Stonecutter laid a castle low
With a groan, and a roar, and a tower's fall.

Long roads the Sword of Fury makes
Hard walls it builds around the soft
The fighter who Townsaver takes
Can bid farewell to home and croft.

Who holds Wayfinder finds good roads
Its master's step is brisk.
The Sword of Wisdom lightens loads
But adds unto their risk.
Advertisement: