Literature / Empire of the East 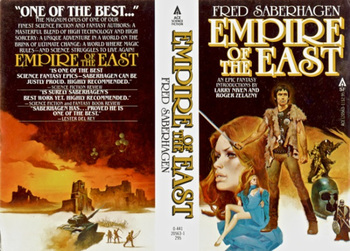 A trilogy of fantasy novels by Fred Saberhagen, set 50,000 years in Earth's future, after a devastating change in the laws of physics which unleashed demons and made most technology unusable. The books are The Broken Lands, The Black Mountains, and Changeling Earth (later re-titled Ardneh's World). They tell the story of the conflict between the titular Empire of the East and the rebellious Free Folk of the West, in particular an orphan warrior named Rolf.

The Books of Swords are a distant sequel to the trilogy.

Empire of the East provides examples of: