Forged by the Gods 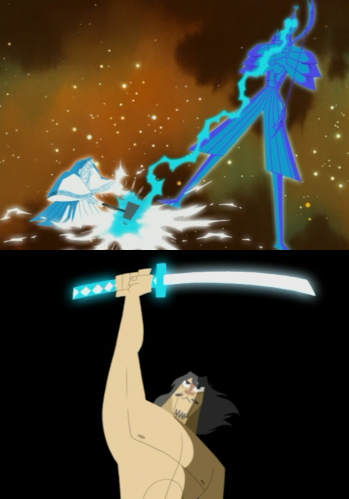 "The Mace of Molag Bal! I give you its true power, mortal. When your enemies lie broken and bloody before you, know that I am watching."
— Molag Bal, The Elder Scrolls V: Skyrim
Advertisement:

The hero has a kick-ass sword, perhaps one he inherited. It's probably unbreakable and can cut through anything. It also has a cool name which is likely meaningful. And it seems like everyone in the whole world wants to get their hands on it.

Why is there so much hubbub about that sword? The world is full of good swords — what makes this one that much better?

Simple. This one is special because it was forged by the gods.

Yes, the gods made this sword. If one of the pantheon is an Ultimate Blacksmith, it's probably his handiwork. How it came into the hands of mere mortals varies. Maybe the gods gave it to someone pure in heart to vanquish evil. Maybe an amazing thief managed to steal it from them. Or maybe the gods are sadistic bastards and just wanted to see what would happen if they put such a powerful weapon in the hands of mortals.

For whatever reason, the mortals have it and all that goes with it.

This is the weapon equivalent of Touched by Vorlons. If there are other divinely crafted weapons out there, it's probable that Like Cannot Cut Like. Sacred Flames may have been involved in the crafting process.