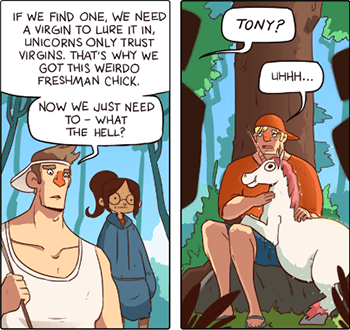 "Som say no evil thing that walks by night
In fog, or fire, by lake, or moorish fen,
Blew meager Hag, or stubborn unlaid ghost,
That breaks his magick chains at curfeu time,
No goblin, or swart faery of the mine,
Hath hurtfull power o're true virginity."
— John Milton, Comus
Advertisement:

So you've got your hands on a spiffy, brand new bunch of Applied Phlebotinum. It will do anything. Launch psychic fireballs, generate matter out of nothing, lay waste to entire towns, fulfill your fondest desires, and let your cat out every evening before bedtime.

There's only one catch: the person using it has to be that rarest of all rarities in a normal, functioning, sex-obsessed adult society.

And by virgin, we mean a female virgin.

And by female virgin, we generally mean a sweet, young (but adult), beautiful, innocent, passive, wholesome virgin. The Action Girl is treated as something of a subversion, as is an actual prepubescent child, a not-so-conventionally-attractive young woman, and the sour-tempered and ancient Old Maid is always played as if it were a subversion.

And just why would someone need to be a virgin to have access to a special power? Most likely because being a virgin is a generally recognized sign of moral purity. When played completely straight, this trope associates (female) virginity with moral purity and implies a Madonna–Whore Complex; because of this, more modern invocations of this trope specify that it is merely a magical rule or the preference of a particular divinity rather than a value judgment.

Sometimes this ideal of purity can be subverted by having the virgin user of the Applied Phlebotinum be morally reprehensible in every other aspect of her life, or even be a villainess instead of a heroine.

One of most common forms of Virgin Power is that unicorns will only approach virgins (or, at the very least, will not flee from them).

If the user of the Virgin Power is the hero's girlfriend, you can expect this situation to create a lot of dramatic tension between the lovers, as they fight the temptation to do the one thing which will render her powers useless. Also, you can expect the villains to try to "relieve" the user of her virginity via rape (even when just killing her from a distance would be the safer and faster option, unless the power in question doesn't allow for this). It may be part of the virgin's powers to overcome The Power of Lust, never giving in to the temptation to have sex.

Eunuchs Are Evil can be a villainous version, if such a character has special powers that come with the position, although most eunuchs are not celibate by choice (and in some cases, sex may still be possible after castration). Contrast Deus Sex Machina. Beware Virgin Sacrifice. Tends to cause Virgin Tension. A Sub-Trope of Conditional Powers. Virgin Vision is not related to this trope, regardless of how it sounds. The inverse is Sex Magic, which is magic powered by having sex.

The strongest healing miracle (contrary to the name, it cannot actually bring back the dead) requires the presence of a virgin to work.

The strongest healing miracle (contrary to the name, it cannot actually bring back the dead) requires the presence of a virgin to work.