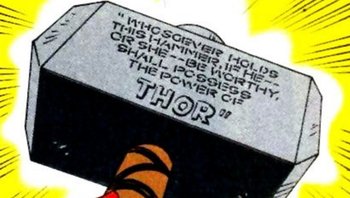 Not always this clearly spelled out
"Well, we know in other cases with their later technologies that the Ancients used sensors that restricted access by detecting specific genetic markers."
— Dr. Dale Volker, "Human", Stargate Universe
Advertisement:

An item, MacGuffin, or other such that can only be used by someone who is, for example, pure of heart, a certain age, part of a certain family/bloodline, or has some rare property that only certain people have. This does not include needing a password, key, or other such item.

Sister Trope to Operator Incompatibility. Contrast Self-Guarding Phlebotinum, which is when the item protects itself against people with a certain quality. If a character is the only one in the cast who meets the requirements, they might also be The Team Benefactor.

In fact, it's later received that even among humans, only some have the ability to access Forerunner tech; namely those descended from specific prehistoric humans whom the Forerunners had given inheritable geas to.