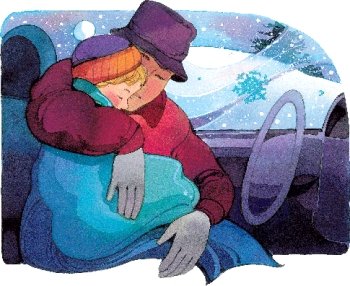 "Problem is, you ain't been loved like you should…
What I got to give will sho' 'nuff do you good!"
— Rufus & Chaka Khan, "Tell Me Something Good"
Advertisement:

Oftentimes the only way to treat someone is to engage in some rather intimate activity. Some of these techniques are derived from actual methods, but often they're played up. You know why. Frequently done to a Plot-Induced Illness.

Variants include the "mouth-to-mouth medicine dosing" or "medicine kiss", climbing into bed with the patient to keep them warm/cool them down (nakedness "for better skin contact" optional), various kinds of blood or power transfers through kissing/licking, a Magic Kiss with healing properties, and so forth. More explicit titles may have straight-up "healing through sex".

To the other extreme, the things a character won't do because they resemble intimate acts, such as mouth-to-mouth resuscitation, can be taken to silly lengths; the superficial resemblance of resuscitation to kissing triggers all manner of modesty and embarrassment, ignoring the pushing and vomiting usually associated with the procedure.

See Deus Sex Machina for the offensive magic variety, Sex Magic if there's magic being made by sexual intimacy, and The Power of Lust. See Undressing the Unconscious if removing an unconscious character clothes is necessary. See also Indirect Kiss. May result in Florence Nightingale Effect. Finger-Suck Healing and Intimate Psychotherapy are Sub Tropes of Intimate Healing. Compare Kiss of Life and Mate or Die. If intimate contact acts as a Power Limiter, see Cooldown Hug.