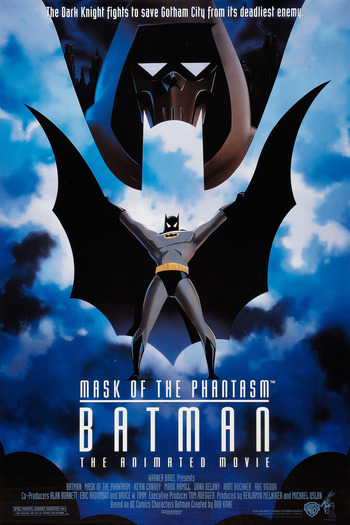 And you thought The Joker was scary...
"Your angel of death awaits..."
— The Phantasm
Advertisement:

Mask of the Phantasm is the first movie of Batman: The Animated Series. Of the various films based on the DC Animated Universe, it is the only one to have been given a cinematic wide release. It was released to theaters on Christmas Day 1993.

As Batman continues his war on Gotham City's underworld, he discovers a new foe who wants to take that war to a whole new level: the Phantasm, a mysterious masked figure who has killed off several of Gotham's high-profile mob bosses. The Phantasm has a similar appearance to Batman and targets criminals like Batman does, which leads the police to blame The Caped Crusader for the killings. As the police try to stop him, Batman tries to clear his name—and tries to stop the Phantasm before another murder happens.

The film also follows Bruce Wayne's past and present relationship with love interest Andrea Beaumont (who has her own ties to the Phantasm) and shows Bruce's first attempts at vigilantism before truly becoming The Batman.

The film was followed by the direct-to-video films Batman & Mr. Freeze: Sub-Zero and Batman: Mystery of the Batwoman.

Batman: Mask of the Phantasm contains examples of the following tropes