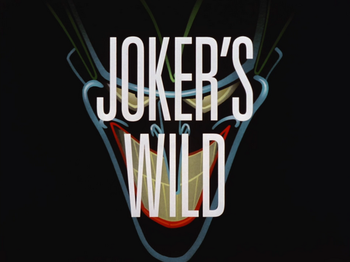 Poison Ivy watches a gardening show in an Arkham Asylum lounge, until the Joker arrives and changes the channel. A guard resolves their argument by switching the channel to a third option, which turns out to be a news report about Cameron Kaiser's new casino resort. The casino's theme is revealed to be based on the Joker (though Kaiser claims it's the generic playing-card joker, not the "criminal fruitcake"). Outraged, the Joker rants about Kaiser cashing in on his image, and then feigns illness in order to make an escape.
Advertisement:

The Joker arrives at the casino, reveling in its tribute to him and almost regretful about his plan to blow it up. Mistaken for a casino employee, he gets assigned to deal a blackjack table, where he quickly annoys the guests into leaving. Kaiser is alerted to the oddity, but seems strangely unconcerned.

Bruce drops by the Joker's table, jerking his chain and confirming that he is the real Joker and not a costumed employee. He slips away and returns as Batman, but accidentally grabs the wrong "Joker," giving the real one sufficient warning to escape.

Kaiser watches on the security monitors as the Joker plants explosives in the basement (full of casino-themed attractions for an unfinished amusement park area), then orders his helicopter to get ready to leave. Batman confronts him, revealing that he's figured out Kaiser's plan to provoke the Joker into destroying the casino so he can collect on the insurance. Kaiser then stuns Batman with an electric-shock trap and has him dropped into an elevator and sent to the basement.

In the basement, the Joker knocks out the still-woozy Batman and straps him to a giant roulette wheel. Batman tells Joker how he's been played for a patsy in Kaiser's insurance scheme. Outraged at this, the Joker disconnects the bombs and leaves to confront Kaiser himself, while still leaving a grenade to take care of his foe.

Batman escapes and finds Kaiser's helicopter pilot knocked out. He takes the Bat-glider to intercept the helicopter where the Joker is holding Kaiser prisoner, intending to kill him and run the casino himself. After a struggle, the helicopter crashes into the casino, where Batman finally captures the Joker and sends him crashing into a slot machine, which showers him with coins.

Back at Arkham, the Joker tries to turn off a news report about the fiasco. However, Poison Ivy, the Mad Hatter, and the Scarecrow demand that he turn it back on, much to his annoyance.