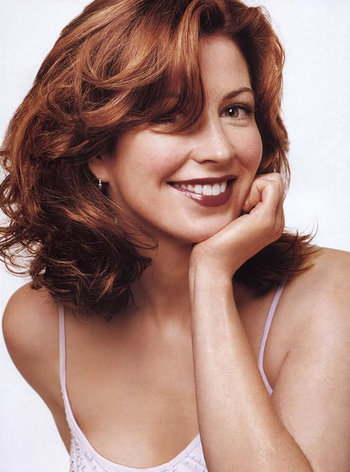 Dana Welles Delany (born on March 13, 1956 in New York City, New York) is an American film, stage, and television actress, producer, presenter, and health activist who has been active in show business ever since the late 1970s.

She developed her skills through working in daytime television and theater. She starred in the Broadway show called A Life, which received critical acclaim in a number of off-Broadway productions as well. It was her role in Nicholas Kazan's controversial Bloodmoon in New York led her to Hollywood. Delany acted in a number of TV series and worked steadily until she could get her own starring vehicle. That happened in 1988 when Delany portrayed an Army nurse Colleen McMurphy in ABC's critically acclaimed series China Beach, the role earning her three Emmy nominations and two Emmy Awards as Best Actress. In the 1990's, Delany moved on to movies (such as in Tombstone where she played Josephine Marcus) and eventually started getting starring roles in films, such as Exit to Eden.

Delany is also a voice actor. She is well-known for playing Lois Lane in the DC Animated Universe and most DC animated adaptations.

Example of:
The Immodest Orgasm