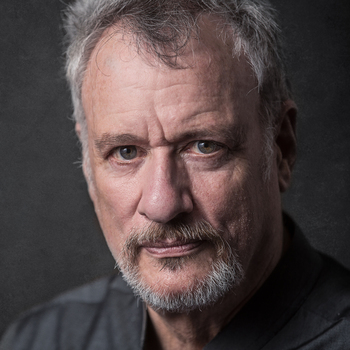 "The trial never ends."
"Roddenberry warned me that I had no idea what I was getting into with Star Trek. Someone should have warned me about My Little Pony! Egads!"
Advertisement:

Well... I suppose that is the end of John de Lancie.

Yes, friends, Philadelphia-born actor John Sherwood de Lancie, Jr. (born March 20, 1948) is best known as that most magnificent of omnipotent bastards Q from Star Trek: The Next Generation, where he was popular enough to return in Deep Space Nine, Voyager, Lower Decks, and Picard.

The son of a famous oboist (also named John de Lancie), de Lancie (the actor, by the way) was diagnosed with dyslexia as a child and didn't learn how to read until he was 12. At the age of 14 he was in a production of Henry V, setting him on the road of acting. He studied acting at Kent State University around the time of the 1970 shootings there. Eventually in the 1970s, he got television work in small character roles in such series like The Six Million Dollar Man and Battlestar Galactica (1978) as well as two doctor characters in the final Emergency TV Movies.

As stated above, his most famous role of Q from the Star Trek franchise, who despite only being in 8 episodes of TNG, 1 episode of Star Trek: Deep Space Nine, and 3 episodes of Star Trek: Voyager became quite popular with the fandom. In one of Q's appearances on Voyager de Lancie's son Keegan played Q's son. In 1996, he would co-found Alien Voices with fellow Star Trek alumnus Leonard Nimoy, which produced several sci-fi audio productions including answering a question of great importance to humanity - What would happen if Spock and Q ever met? Turns out something like this.

He would return to the role of Q in The New '20s, with a voice cameo in Star Trek: Lower Decks and a critical supporting role in season 2 of Star Trek: Picard.

Being a part of Star Trek is far from de Lancie's only contribution to science fiction shows. He also played Frank Simmons in Stargate SG-1, CIA Director Allen Shapiro in the Doctor Who spin-off Torchwood: Miracle Day, Russell Bennett in the film Evolver, and even appeared on Battlestar Galactica (1978). Other shows he has worked on include Law & Order: LA, Breaking Bad, Mission: Impossible (the revival from The '80s), and Charmed.

De Lancie's voice is quite distinctive and has lent it to several cartoons and video games. Notable roles include Dr. Quest in Jonny Quest: The Real Adventures, Desmond's father William Miles in Assassin's Creed: Revelations, Professor Fitz Quadwrangle in Quantum Conundrum, Alarak in StarCraft (including Heroes of the Storm), Mr. Freeze on DC Super Hero Girls , and My Little Pony: Friendship Is Magic mischievous draconequus (and Q Expy) Discord, which is currently his most well-known voice-over role thanks to the show's immense popularity. He had completely forgotten he had done anything My Little Pony relatednote It was only two episodes at the time after all, and he does a lot of other things by the time a preview clip appeared online, at which point he was overwhelmed by the brony community, noting that at least Gene Roddenberry warned him about Trekkies beforehand. De Lancie has since come to embrace the bronies and worked on a documentary to help shed some light on the fandom.

He has the perfect voice for reading classic literature aloud. Here is