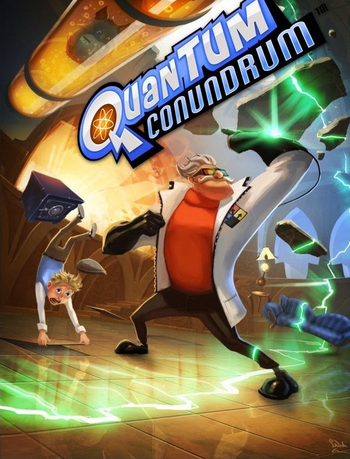 "Flip a Switch" by Gremlin, the theme song written for the game, neatly summing up what you can expect.

Quantum Conundrum is a first-person perspective puzzle hybrid game in the same vein as Portal, of which director Kim Swift was a creative lead.

The player character is the 12-year-old nephew of Professor Fitz Quadwrangle. When he drops by for a visit, his uncle disappears in an explosion. It is up to him find Fitz through the use of the Inter-Dimensional Shift Device (IDS device), which can move him between dimensions and affect the physics of the world around him.