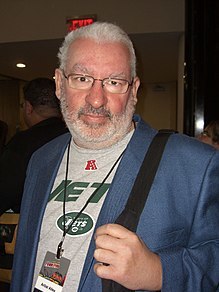 Tom DeFalco (born June 26, 1950) is an American comic book writer known for his association with Marvel Comics, and in particular his run on Spider-Man. He also created a whole host of iconic characters for the company which endure to this day. DeFalco is known for his laid back style, having a less-powerful personal vision compared to others while being open to his co-worker's ideas.

From 1987 to 1994, DeFalco replaced the infamous Jim Shooter as Editor-In-Chief. His run is well-regarded, even if the era (the speculation boom) was less so, and instead Marvel's problems were primarily blamed on Ron Perelman. He resigned from his position after disagreements with the upper management, but continued as a writer long afterwards.

In addition to his work on Spider-Man, he's also known for overseeing the Marvel 2099 line, creating the New Warriors, Thunderstrike, Darkhawk, and creating and penning Spider-Girl, an Alternate Universe story starring Mayday Parker (daughter of Peter and Mary Jane).

Outside of his large involvement with Marvel, he got his start at Archie Comics, and has still worked with them on occasion. Notably, he is at least partially responsible for the line of digest-sized Archie comics which have been a mainstay of American supermarket checkout aisles for decades, having proposed the idea early on in his career.