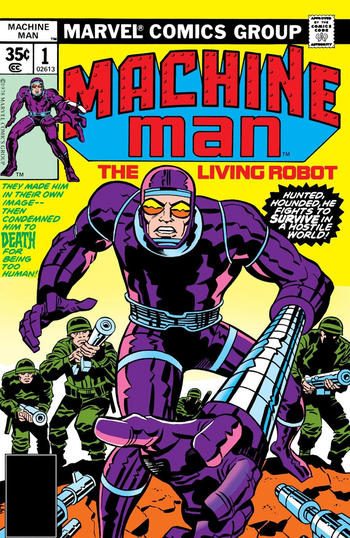 Machine Man is a Marvel Comics series created in the 70's by Jack Kirby, who was then succeeded by Steve Ditko on art with Marv Wolfman as writer.

In 1976, Marvel published a Comic-Book Adaptation of 2001: A Space Odyssey written and drawn by Jack Kirby, followed by an ongoing series which ran for ten issues. The first seven issues focused on the Monolith aiding humans in the past and the future. The last three focused on X-51 a.k.a. Machine Man, who was later incorporated into the Marvel Universe. The Monolith returned in the last two issues of X-51's 1999-2000 series, in which it was revealed that it had been created by the Celestials (in the Marvel Universe, at least...)

Dr. Abel Stack, a scientist working on a government project to design robotic soldiers capable of acting like humans, had a theory that a robot could only function like a human if it was raised like one. Taking one of the robots home, Stack raised X-51 as if it was his own son.

After the project was shut down because all of the other robots started displaying psychotic behavior, all of the robots were ordered destroyed using an auto destruct device in each robot. Sacrificing himself, Abel Stack managed to remove the device shortly before it detonated. Now on the run from the government, X-51 - now calling itself Aaron Stack- tried to make his father's dream of peace between humans and robots a reality, becoming a superhero dubbed "Machine Man" in the process.

Aaron has been a member of the Avengers, but he's better known for his later stint as a member of Nextwave.