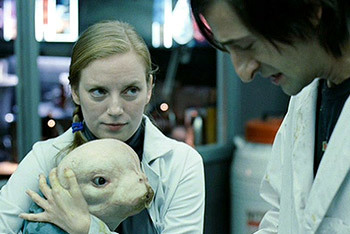 Not "it". Her.
Dr. Sarah Kinney: There's no reason to subject X-23 to the bonding process until she's X-gene active and fully matured! [...]
Zander Rice: "No reason"? Are you sure you just don't want to see your little pet go under the knife?
Sarah: Don't be stupid.
Zander: Well, you've certainly spent a lot of time in her cell lately.
Sarah: Martin, the limited time I'm given with X-23 is necessary for development. Your own psychologists have told you that.
Zander: Aw. An overprotective mother.
— X-23: Innocence Lost
Advertisement:

She's the mother you always wanted. She gives you a candy when you take your medication, warns your brothers about messing around with you, gives you a shoulder to cry on when you feel lonely, and occasionally gives maintenance to your prosthetic leg. Of course, she's the first to give you a hug after you go through the tax-paid psychiatric treatment because you're told you're a "special kid with great potential" (whatever that's supposed to mean).

Note that regardless of the gendered implications of motherly, the Fatherly Scientist is also not uncommon, as the focus is largely on the scientist's conscious decision, with or without struggle, to reject treating the creature, creation, or just plain human being as a mere test subject for experimentation, choosing instead to forge and nurture a familial bond with them once it is acknowledged that the subject is capable of experiencing a range of emotions like any other. It's generally more common for the Motherly Scientist to be female, however, because Women Are Wiser and are assumed to have "motherly instincts" and care for the test subjects as people while men are assumed to view them more dispassionately as mere experiments. For the sake of consistency, the scientist will, for the large part, be referred to as female for the rest of this article.

The trope can contain one or more of the following scenarios, depending on the scientist's personality and background. (And as evident within these scenarios, the role isn't limited to a scientific researcher, but also doctor, technician — and even farther-flung, priest or magic-user — as long as there is a strict set of rules, obligations, expectations or beliefs that the motherly figure turns her back to treat the subject with care.)

Most of the time, the plot starts with a brilliant doctor participating in an Evil Experiment on human test subjects, most of them young children (and perhaps an older Wendy) or students in a conveniently-placed high school. Everything, of course, in the name of Science, or for the Greater Good. It could also happen that the doctor in question was deceived or coerced into performing said experiment — or maybe she just was hired to keep the kids quiet.

Sooner or later, an experiment goes horribly wrong (or horribly right), or the truth is finally revealed, making the doctor realize the error of her ways. After rescuing them, she decides to become the test subjects' adoptive mother, forming a Secret Project Refugee Family and living Happily Ever After.

In other cases, she just feels responsible for the guys now that they've grown up — or maybe there's some pending business to finish so she can redeem herself and move on with her life. And if you think a normal Mama Bear or Papa Wolf is fucking scary, Hell Hath No Fury like a Motherly/Fatherly Scientist with access to One-Man Army levels of weaponry, technology, money, or superpowers to protect his or her children.

There's also the other Doomsday scenario. She dies, and her charges decide that nothing is holding them back from taking revenge on everyone.

After researching a non-human subject for a while and giving it a name, the doctor's nurturing instincts finally kicks in, causing the doctor to form a parental bond with the poor little thing until the eventual decision to free the subject. If she met the creature in the jungle, and there are more of them, she could become a Nature Hero. Can turn into "Tarzan And Jane" if the subject is biologically and age-compatible with her. If by contrast, the subject isn't biologically compatible and the scientist needs to separate, it ends up with a goodbye.

Whatever the plot is, the common denominator is the parental and protective feelings of the scientist towards the test subject.

If a scientist just happens to be a nice parent, this trope doesn't apply (see Mad Scientist's Beautiful Daughter) unless her child was genetically engineered and carried inside her womb or experimentally transformed into something else.

Tend to overlap — depending on the circumstances — with Mad Scientist or Reluctant Mad Scientist, Psychologist Teacher, Kindly Vet, Team Mom/Team Dad, Mama Bear/Papa Wolf, and in some extreme cases, Anti-Villain.