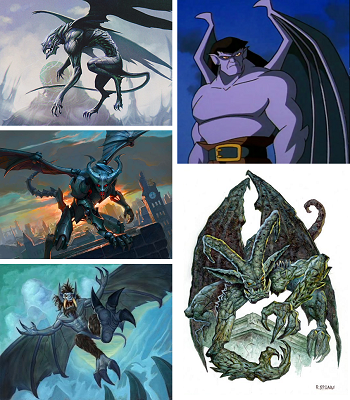 Clockwise from top right: Gargoyles from Gargoyles, Dungeons & Dragons, Hearthstone: Heroes of Warcraft, and Magic: The Gathering
GARGOYLE, n.
A rain-spout projecting from the eaves of mediaeval buildings, commonly fashioned into a grotesque caricature of some personal enemy of the architect or owner of the building. This was especially the case in churches and ecclesiastical structures generally, in which the gargoyles presented a perfect rogues' gallery of local heretics and controversialists. Sometimes when a new dean and chapter were installed the old gargoyles were removed and others substituted having a closer relation to the private animosities of the new incumbents.
— The Devil's Dictionary
Advertisement:

In Real Life, gargoyles are statues of grotesque humans and animals designed to ward off evil spirits and channel rainwater from rooftops and spit it out, (hence gargling) away from the building to prevent damage from erosion. Most commonly found on large buildings such as cathedrals.

Fiction, however, has decided that they'd make a great species, so they often appear in fantasy settings (Urban or otherwise) as a race of Winged Humanoids that have a penchant for perching on high terrain. Given their origins, they also tend to have an ability to turn to stone, voluntarily or not.

Another common feature is that any damage done to them while animated can be repaired while statuefied, but destroying the statue kills them permanently.

Some, however, may actually be made of stone rather than flesh and blood. If that's the case, they (or at least the first of their kind) may have actually been statues before being brought to life.

Traditionally, in folklore, they were benevolent, despite their appearance, which was framed as being frightful to scare demons away from churches, but meeting their gaze was dangerous. This is less common in modern fiction.

Fun fact: the technical term for a gargoyle that doesn't include a rainspout is a grotesque — this means something different on this wiki, although the two can coexist.

Compare Animate Inanimate Object and Our Alebrijes Are Different. See also Asian Lion Dogs for another kind of fantastic creatures derived from statuary.

Alternative Title(s): Our Gargoyles Are Different