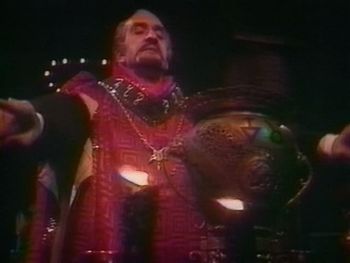 SuperWho: The Early Years
"I see. So all we've got to deal with is something which is either too small to see or thirty feet tall, can incinerate you or freeze you to death, turn stone images into homicidal monsters and looks like the devil."
— Captain Yates sums up UNIT's job.
Advertisement:

The one where the Brig shoots a statue.

Written by Robert Sloman and Barry Letts (under the pseudonym Guy Leopold). This five-episode serial first aired from May 22 to June 19, 1971.

The Doctor tries to explain to Jo that there's no such thing as magic while he rigs a remote control gadget for Bessie. He suddenly becomes uncharacteristically alarmed by a planned archaeological dig on a barrow in the village of Devil's End. He races there with Jo in tow, where he discovers that The Vicar, Mr. Magister, is really the Master in a pair of fake glasses (no way!) who is using what looks like black magic rituals to summon the Devil.

In fact, the "devil" is a Sufficiently Advanced Alien called Azal, who actually inspired most of the classic appearance tropes of the Devil — horns, hoofs, shaggy goat legs — and claims to have set the Earth in motion as an experiment. UNIT (reluctantly) teams up with a local white witch, the Master babbles incantations while hanging out with cowled cultists and lighting black candles, and the archaeological dig unleashes a cold field. The Doctor almost dies, but is able to use his Bizarre Alien Biology to withstand extreme cold. His rescuers are rather confused by his two hearts.

The Doctor confers with UNIT by drawing equations on his motor bike's wind shield, and makes it back to the village in Bessie, where he's immediately tied to the maypole by the local Morris dancers. They want to burn him at the stake for being a witch. The local actual witch and UNIT help him out using parlor tricks, and he's able to impress the villagers with Bessie's remote control.

With the Doctor and Jo in the village, and UNIT troops cut off outside by a heat barrier, Azal appears and says that he will either pass on his powers or destroy the Earth as a failed experiment. The Master is hoping to be the recipient of the powers. The Doctor insists that it's not magic, but alien science, and explains to the local witch that even her magic is just invisible science powered by her mind. Azal is swayed by the Doctor's eloquent defence of Earth and offers him the powers instead. The Doctor of course refuses, and Azal angrily decides to kill him. Jo offers herself in the Doctor's place and Azal, unable to comprehend self-sacrifice, suffers a Critical Existence Failure.

Meanwhile, UNIT troops have got past the heat barrier by reversing the polarity, the Brigadier has ordered Five Rounds Rapid at animated gargoyle Bok, and they arrive just in time to apprehend the Master and take him away to await trial for crimes against humanity: attempting to conquer the world, subjugation of the people of Devil's End, and infliction of Morris dancers on an unsuspecting public.

Trope Namer for Five Rounds Rapid, and the source of the famous "reverse the polarity" line. It is one of the few five-part stories in the series' history, and the only one always intended to be that way: Season 6's "The Dominators" began life as a 6-parter but two of its planned instalments were compacted down into one during a contentious scripting process, and the following serial, "The Mind Robber", was expanded from 4 episodes to 5 to make up the difference.

An excellent documentary, "Return to Devil's End", was made in 1996 by Nicholas Briggs and stars most of the original cast.