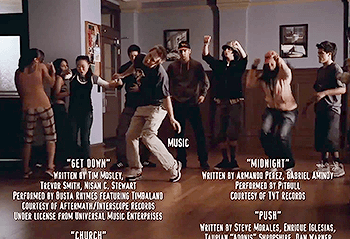 Everybody dance now!
"We saved the world. I say we party."
— Buffy, Buffy the Vampire Slayer, "Prophecy Girl"

It seems, particularly when everyone lives Happily Ever After, the typical response is to get everyone who was ever involved in The Hero's Journey, even if they only passed them on the street, together for a big celebration where everyone dances their butts off. Bonus points if the hero's enemies attend the party. Mega points if it's in slow motion.

The Hero, or a member of his True Companions, may sing the song we're all rocking out to. The writers might also decide to use this opportunity to Clean Up Romantic Loose Ends, or throw in some last-minute Heel Face Turns.

If it starts before the plot is resolved, it's a Concert Climax. Closely related to "Everyone Comes Back" Fantasy Party Ending. See also Sudden Musical Ending, Food End, Dancing Mook Credits.

Metro City celebrate their new hero and Megamind celebrates to the song of "Bad" by Michael Jackson.

Metro City celebrate their new hero and Megamind celebrates to the song of "Bad" by Michael Jackson.