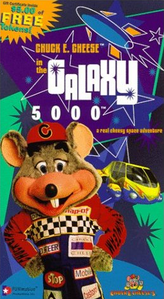 What happens when you send the mascot(s) of a pizza joint to an F-Zero race. The whole thing is on YouTube

Chuck E. Cheese in the Galaxy 5000 provides examples of: