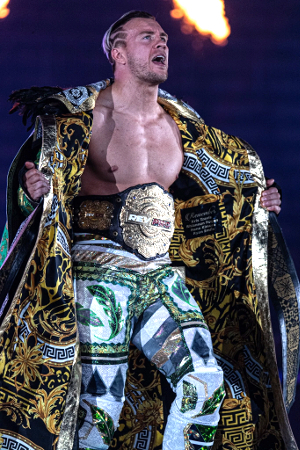 William Peter Charles "Will" Ospreay (born 7 May 1993) is a British professional wrestler known for his tenure with New Japan Pro-Wrestling, following and adjacent to appearances with Pro Wrestling Guerilla, Progress Wrestling, Rev Pro, and other indy wrestling promotions. He is primarily known for his aerial style and quickly became one of the rising stars on the independent scene before being signed to NJPW and ascending to be one of its top international stars. He has been a PROGRESS Wrestling Champion, a 2x Best of the Super Juniors winner, 3x IWGP Junior Heavyweight Champion, NEVER Openweight Champion, the 2021 New Japan Cup winner, and the second-ever IWGP World Heavyweight Champion.

Previously a member of NJPW's famous Chaos faction, Ospreay is currently the leader of The United Empire (formerly "The Empire"), a heel faction that he founded in 2020 shortly after his heel turn as "The Commonwealth Kingpin". Under his leadership, the United Empire has become one of the company's most prominent and recognized multi-national stables since Bullet Club.

He's widely considered to be among the best wrestlers from the English-speaking world currently active in the business, having wrestled in a whopping 19 matches that were awarded five or more stars by Dave Meltzer. For perspective: as of this writing, he's evenly matched with Kenny Omega, who's been wrestling more than a decade longer than him.