Crying at Your Birthday Party 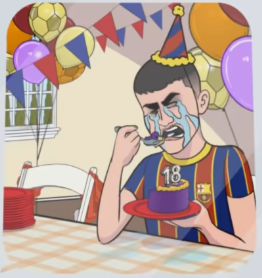 Why is Bob crying at his own birthday party? Shouldn't this be a happy occasion?

A character celebrating their birthday, for whatever reason bursts into tears during their party. Whatever the reason for the person of the hour, it's usually unexpected and takes people aback.

Can sometimes result from a One-Person Birthday Party, or because the party has gone badly wrong. Compare A Birthday, Not a Break. In rare instances it can be Tears of Joy. Can occur during a Birthday Episode (of course) or an Ageless Birthday Episode.