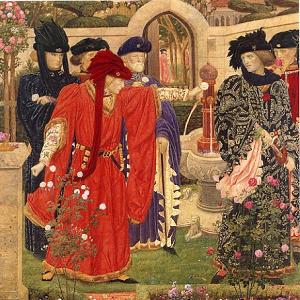 And here I prophecie: this brawle to day,
Grown to this faction in the Temple Garden,
Shall send between the Red-Rose and the White
A thousand Soules to Death and deadly Night.
—Warwick, Henry VI, Part 1, Act II, scene iv.
Advertisement:

Henry VI refers to a trilogy of plays describing the end of The Hundred Years War and the outbreak of the Wars of the Roses. The plays were written very early in Shakespeare's career, and seem to have gained some immediate success (and even envy on the part of his rival dramatists). These early plays tend to be episodic in plot and sometimes overly ornate in language, but they nevertheless give an early indication of the powerful use that Shakespeare would make of English history in his later "chronicle plays." The general theme is that division brings disaster; these plays, performed as a unit with the likewise early Richard III, constitute a plea for national unity under The House of Tudor.

In 2016 the Oxford University Press announced that their analysis of the writing style of the Henry VI trilogy indicates it was a collaboration between Shakespeare and Christopher Marlowe. While this is far from universally accepted, Shakespearean scholars do widely agree that he collaborated with somebody in the early years of his career before striking out on his own.