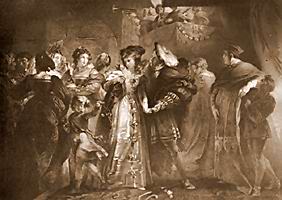 Henry VIII is a play co-written by William Shakespeare and John Fletcher. It tells the story of King Henry VIII of England, focusing on the machinations of Cardinal Wolsey surrounding both the trial and execution of the Duke of Buckingham and the annulment of Henry's marriage with Katherine of Aragon. It ends with Henry's marriage to Anne Boleyn and the subsequent birth of the future Queen Elizabeth I. In real life these events occurred over a 13-year period; here they happen within (at most) a few months' time.
Advertisement:

The play is thought to have first been performed privately as part of the celebrations surrounding the marriage of James I's daughter Elizabeth to Frederick, Elector Palatine.note Elizabeth's grandson eventually succeeded to the British throne as George I. Its first public performance in June 1613 led to the Globe Theatre burning down. Notwithstanding the disaster, Henry VIII was one of the few Shakespearean plays to retain its popularity after the Restoration and into the 18th and 19th centuries. The great Georgian actress Sarah Siddons considered the role of Queen Katherine to be Shakespeare's finest female part.