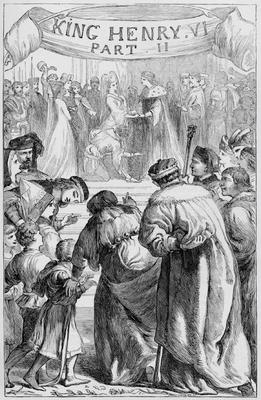 Small curs are not regarded when they grin;
But great men tremble when the lion roars;
—Queen Margaret, III.i
Advertisement:

A history play by William Shakespeare and Christopher Marlowe, Henry VI Part 2 is the second of three plays describing the end of The Hundred Years War and the outbreak of the Wars of the Roses. In this installment, King Henry VI meets his manipulative wife Margaret; the trusted Duke of Gloucester is assassinated; the people stage a rebellion; and Richard, Duke of York, plots to take control of the throne. The other plays in the series are Henry VI Part 1 and Henry VI Part 3.

We begin with the marriage of Henry to Margaret — however, Suffolk's plan to dominate the King may be scuppered by the Duke of Gloucester: popular, honest and trusted by the king. He conspires with other members of the court to disgrace and then murder Gloucester, but he is himself exiled and killed for the crime.

Meanwhile, the Duke of York stakes his claim to the throne (which is at least as good as Henry's), and the Duke of Salisbury and The Earl of Warwick pledge their support. York is given the command of a Royal Army to suppress a rebellion in Ireland, but before he embarks, he arranges a rebellion against the crown by a former officer of his, Jack Cade. (This is the context of Dick the Butcher's immortal line, "The first thing we do, let's kill all the lawyers!") Cade claims to be descended from the same line as York — this will test the public's reaction to the claim, and also provide York with an excuse to return to England at the head of an army.

Cade captures London, but proves himself to be a tyrant and Lord Clifford is able to persuade the commoners to abandon him in favour of King Henry. York returns with his army and, finding his thunder stolen by Clifford, declares that he wishes to protect the King from the treachery of Lord Somerset. When Henry rejects this, York openly declares his claim to the throne and, supported by his sons Edward and Richard, fights and wins a battle against the Royal forces. England's nobility choose sides as the King flees alongside Margaret and Young Clifford, whose father was killed in the battle.