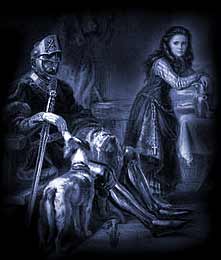 Civil dissension is a viperous worm
That gnaws the bowels of the commonwealth.
—Henry VI, III.i
Advertisement:

A history play by William Shakespeare and Christopher Marlowe, where Marlowe is believed to have written the majority of Part 1, Henry VI Part 1 is the first of three plays describing the end of The Hundred Years War and the outbreak of the Wars of the Roses. Part 1 deals with the resumed war between the French and English and sets up many of the conflicts that run through the other two plays, but critics are divided over the quality of the play: older critics deride it for its use of violence and conventions, while more modern critics are more positive, emphasizing its themes of failing chivalry and patriotism. The other two plays are Henry VI Part 2 and Henry VI Part 3.

The play opens with the funeral of the great warrior king Henry V (though his play would be written later), and we see already that the English nobles are beginning to feud among themselves.

Meanwhile, in France, the great chivalric knight Sir John Talbot is meeting new resistance from an unexpected source — a woman. La Pucelle (i.e., Joan of Arc) has arrived in the Dauphin's camp and revitalised his flagging army. Joan distinguishes herself by her unconventional, underhanded style of warfare, directly contradicting and ultimately destroying Talbot's outdated ideas of chivalry and honourable combat. This, together with the cowardly Fastolf (a precursor to Falstaff), signals the end of the chivalric age.

The young king, Henry VI, arrives for his coronation in France and tries to reconcile the feuding nobles, who have by now divided themselves into two camps symbolised by red and white roses. He inadvertently makes things worse by seeming to favour the Red Rose faction (Winchester), then sending the two chief rivals out at the head of two parts of his army — a recipe for disaster. The Dukes of York (leader of the White Rose faction) and Somerset (leader of the Red Rose faction) refuse to come to each other's aid in battle and as a result, Talbot is abandoned by both and killed by the French. York manages to defeat the French and captures Joan, whom he orders to be burned at the stake.

One of the spoils of the English victory is a young French princess, Margaret of Anjou. The Earl of Suffolk plots to marry her to King Henry and thereby gain influence over the throne, setting up events in the next installment.