Useful Notes / Wars of the Roses 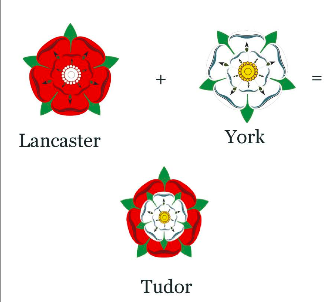 Three decades of blood and misery, but at least they got a nifty logo out of it.
"There are only two ways to feel about the Wars of the Roses. Either the endless violent seizures of the Crown makes you thrill to one of the great English epics, or else it leaves you feeling slightly numbed. If you're in the dazed and confused camp, the temptation is to write off the whole sorry mess as the bloody bickering of overgrown schoolboys whacking each other senseless on the fields of Towton, Barnet and Bosworth."
— Simon Schama, A History of Britain
Advertisement:

The Wars of the Roses were a series of dynastic civil wars set in England between 1455 and 1485. They originated in a struggle between descendants of two of King Edward III Plantagenet's eight sons. Henry "Bolingbroke" of the House of Lancaster stole the throne from his cousin, Edward's first grandson Richard II. Although his house had a couple of strong monarchs (see Henry V), Henry VI (son of Henry V, and grandson of IV) turned out to be a strange boy with mental issues. note There were theories suggesting that Henry's mental health declined significantly after he received the continuous stream of bad news that is England's losses in France during the final stages of the The Hundred Years War. On hearing of the final loss of Bordeaux in August 1453, he experienced a mental breakdown and became completely unresponsive to everything that was going on around him for more than a year. To pile on the misery, the loss of English territory was a blow to Henry's prestige, and the war effort on the continent created a whole host of problems. He was challenged for the throne by The Rival House of York (a cousin line descended from Edward III). After thirty years of conflict, in which almost all of the Lancastrians died, Henry Tudor took the final victory and was crowned Henry VII. He was a cousin of the Lancastrian side (half-nephew of Henry VI), and married Elizabeth of York, a daughter of the Yorkist faction (Edward IV, specifically), uniting the two sides into The House of Tudor. However some historians claim this wasn't the end of the Wars, as there were still threats to Henry from Yorkist Pretenders, which a lot of the nobility didn't seem ready to help him against.

On a side note, the "Wars of the Roses" were never called that by contemporaries. While the name does come from the White and Red Rose badges of the Yorkists and Lancastrians, respectively, it wasn't until Shakespeare and Walter Scott that the conflict became known by its now common name. Earlier commentators might have called it the Cousins' War, the English Civil War (a name later taken by a rather more ideological conflict) or perhaps as the War of the English Succession (which later became a now-disused name for the Nine Years' War). Until World War I, the Battle of Towton was the bloodiest single day for British soldiery; around 28,000 men perished on those snowy fields, a record that would not be surpassed until the opening day of the Battle of the Somme 450 years later. To this day, it remains the bloodiest battle ever fought on British soil.

For the novel/film, see The War of the Roses.

Wars of the Roses in works of fiction and historical fiction:

Alternative Title(s): The Wars Of The Roses