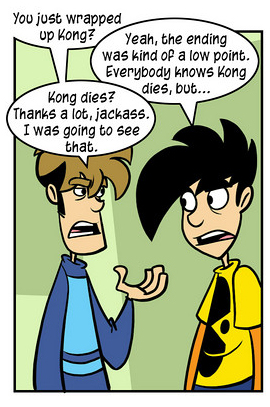 We have a general policy on Handling Spoilers. But sometimes, there's no point. Some works have become so common, old, or Spoilered Rotten, that there are probably only one or two humans left worldwide who haven't seen or read it and still care about not seeing spoilers. We feel for them, but we can't help them; catering to them would leave the wiki half-covered in spoiler tags.

To that end, here's an incomplete list of pages where you won't see spoilers at all — either the page is designed for people who've already consumed the whole work, any spoilers are Late Arrival Spoilers and shouldn't be on that page to begin with, or the work is so seminal that everyone already knows all the spoilers.

Incidentally, if you're utterly disgusted with big blocks of whited-out text (or blacked out if you have Night Vision) turning everything into Swiss cheese, there's an easy solution: turn off spoilers, and see everything without having to click on it. It's as easy as hitting the "Show Spoilers" switch near the top of the page, and you can also go into your profile

If that's still not enough, you can help us clean it up! If the spoiler text really has nothing to do with the trope, go ahead and delete it. Or, if the entire page should be spoiler-free, you can use the "strip spoilers tool

" to remove the spoiler tags from the entire page — but if you do this, remember to do two things: first, add a general unmarked spoiler warning at the top of the page; and second, check the page for stray brackets, as sometimes potholes within spoiler tags can get a little messed up.