Do Not Spoil This Ending 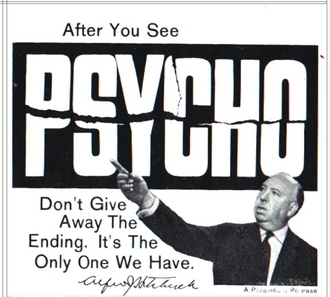 "Especially you in the balcony!"
"Hello. He-he-he-he-have some respect and don't spoil the game
It's impossible to have mysteries nowadays
Because of nosy people like you
Please keep all of this between us
If you post it online, I won't make anymore secrets
No one will be impressed
It will be your faaaaaaaaaaaaaaaaaaaaaaaaauuuuuuuuuuuuuuuult"
— abc_123_a.ogg,

ATTENTION READERS: DO NOT REVEAL THE ENDING OF THIS ARTICLE TO OTHER TROPERS!

The Twist Endings of many shows and movies have become totally open secrets. Some productions have tried to avert this, admonishing audiences not to reveal the shocking twist or revelation that ends the show.

This is effectively secrecy on the honor system, and it might not last too long.

Compare Spoil at Your Own Risk, where companies take legal action against people who reveal spoilers.

Due to this trope's nature, every single example on this page is a spoiler by default and most of them will be unmarked. You Have Been Warned.

Sonic - Slow down on spoilers

Sonic advises viewers on not spoiling any information to others who haven't seen the film.

Sonic - Slow down on spoilers

Sonic advises viewers on not spoiling any information to others who haven't seen the film.