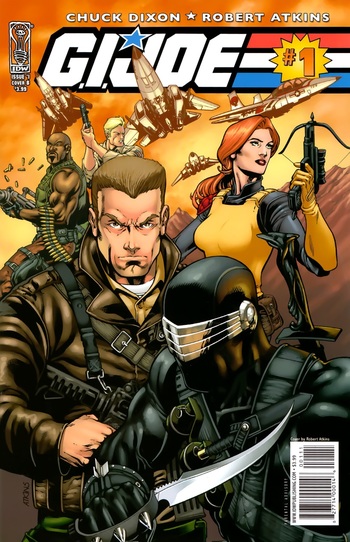 Thanks to the cancellation of volume 4, IDW's G.I. Joe continuity went quiet for over a year. That changed with the announcement of Revolution: a Crossover series that would merge IDW's G.I. Joe and Transformers universes, along with Rom, Micronauts, M.A.S.K. and Action Man into a single shared continuity: the Hasbro Comic Universe. In it, the G.I. Joe team, after being defunct for two years, are recommissioned to fight the "threat" of the Transformers... but are unaware of the alien infiltrators lurking in their midst.

In the aftermath of Revolution, season 5 of the G.I. Joe continuity launched, with a new, more science-fiction oriented series by Aubrey Sitterson. Meanwhile, other G.I. Joe characters would appear in Revolutionaries, ROM, and Optimus Prime on an ongoing basis. Visit their pages for more details on them.