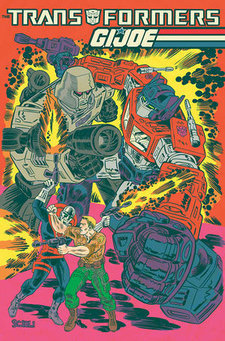 WARNING: This comic series gets as insane as this cover is awesome in every sense of the word.
Advertisement:

Take Transformers, take G.I. Joe, give them to the guy who made American Barbarian, let him filter them through Jack Kirby and gonzo art comics, and lo and behold, you might get something like Transformers vs. G.I. Joe.

The series, written by Tom Scioli (who also draws the series) and Transformers group editor John Barber, has the war between the Autobots and Decepticons colliding with the war between G.I. Joe and Cobra. But things don't exactly go as paint-by-the-numbers as you'd think it would...

This comic series contains examples of the following tropes: