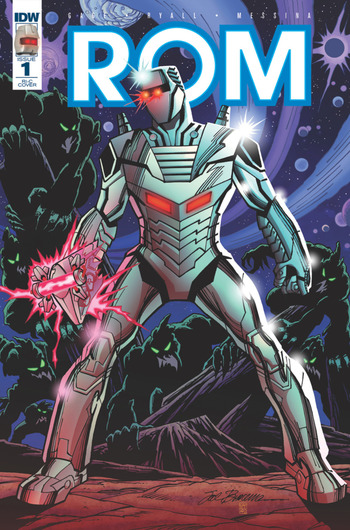 He is Rom, Lord of the Solstar Order. Rom, the Wraithslayer. ROM, the Space Knight!

But he must be careful. The Dire Wraiths can assume any form they wish...

Launched in May 2016, ROM is IDW Publishing's reboot of ROM: Spaceknight, set in a Darker and Edgier (though not by much) universe. The comic is penned by Ascended Fanboys Chris Ryall and Christos Gage, with art by David Messina and Paolo Villaneli.

As a Hasbro licensed property, the comic is part of the Hasbro Comic Universe, and crossed over with the other series as part of Revolution. The comic ended with issue 14, and was retooled after First Strike as Rom and the Micronauts.