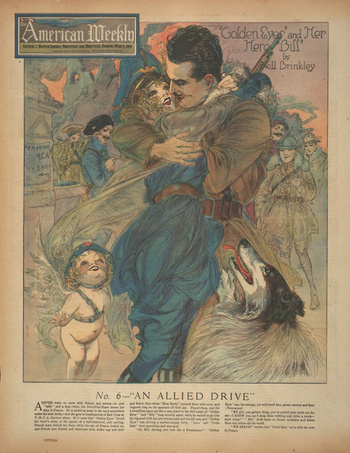 Love in a time of war...
"In the amethyst twilight of a quiet church the two lovers and their war-dog keep a vigil as the knight did long ago when he fiercely desired that his arms be blest with victory and he himself return. This time no tears. These are three soldiers now."
— Nell Brinkley, "Golden Eyes" and Her Hero "Bill" Over There No. 1
Advertisement:

The product of prolific illustrator and cartoonist Nell Brinkley, "Golden Eyes" and Her Hero "Bill" is a serial comic that concerns the adventures of a girl known as Golden Eyes during World War I. Running from March 1918 through February 1919, the serial was published in the form of 21 full-color, one-page illustrations for the cover of The American Weekly (a popular Sunday newspaper supplement). The series was renamed "Golden Eyes" and Her Hero "Bill" Over There after only a handful of installments (to reflect that the narrative had shifted to France) and would keep the new name for the remaining 15 covers.

As the serial begins, heroine "Golden Eyes" must bid her sweetheart Bill farewell when he is deployed to France to fight the Germans. He leaves his faithful dog "Uncle Sam" in her care, and while girl and dog try to do their part for the allies from home they're spurred into action by the discovery of a German spy in Golden Eyes' own backyard. Golden Eyes, with Uncle Sam at her side, enlists as an ambulance driver for the Red Cross, and they are briefly reunited with Bill in France before duty separates them again. The three are reunited and separated several times throughout the course of the war, and end up rescuing each other from capture and injury alike as they fight for the allies - and for their future.

The serial is notable for its proactive heroine, patriotic underpinnings, and distinct Brinkley art style (which blended elements of Art Deco and Art Nouveau into elegant, sumptuous illustrations that embodied the ideals of feminine beauty in the 1910s).

The narrative portion can be read here

in its entirety, with a mostly accurate transcription of the text beneath each cover. (Installment #3, which was a full-page advertisement for Liberty Bonds featuring Golden Eyes and Uncle Sam, is missing from the gallery but easily searchable through the web.)

Tropes present in "Golden Eyes" and Her Hero "Bill" include: