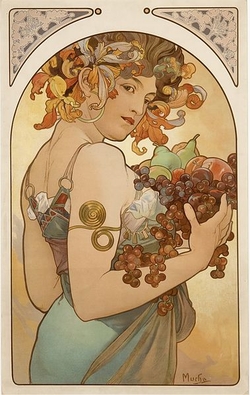 A new style of decorative art that predominated much of the Fin de siècle (The Gay '90s and The Edwardian Era), Art Nouveau's style consists of asymmetric and fluid movements, and naturalistic colors and themes. Its style was applied to every field, notably buildings, crafts, paintings, lithographic posters and furniture.

The movement has influences from drawings of plant life, works by Alphonse Mucha, Pre-Raphaelite paintings, Oriental flavours, and the Neoclassical, Romantic, Post-impressionist and Expressionist movements. The style spread throughout Europe, where its mode was dubbed in many languages, typically termed as "new", "modern" or "young" art. In Germany and Northern Europe, it was called the “Jugendstil” (youth style) or "secession". In Catalonia, it was called "Modernisme," and is associated inextricably with the weirdly-skeletal but delightful architecture of Antoni Gaudí. In Italy, it was called the stile Liberty after the British department store Liberty in London, which apparently supplied a lot of the brightly-coloured fabric Italian artists working in the style liked to use.

Whatever its name, Art Nouveau fell out of favour during or before World War I. The exuberant, richly ornamented style seemed wrong somehow after so much death and destruction and the growing anxiety of the Machine Age. However, it influenced Art Deco and other modernist movements. With the advent of Solarpunk however, it is starting to see something of a revival.

This style predominates in much of 1890s-style Steampunk. Note that art movements before 1890 range from Romantic to Impressionist.