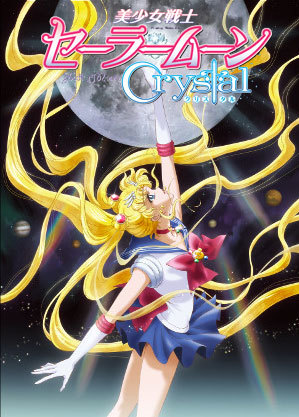 Pretty Guardian Sailor Moon Crystal (Sailor Moon Crystal outside of Japan) is the 2014 Animated Adaptation of Naoko Takeuchi's seminal Magical Girl Warrior manga Sailor Moon. In a nutshell, Crystal follows the plot of the manga more closely than the 1990s anime and updates the franchise for the 21st century. Toei Animation announced the series in 2012 in time for the 20th anniversary of Sailor Moon.

The series premiered on July 5, 2014 on Nico Nico Douga, Crunchyroll and Neon Alley and the first two seasons consists of twenty-six episodes. It was simulcast worldwide on a twice-monthly basis (the first and third Saturdays of each month).

that it would produce the third season based on the "Death Busters" arc; these episodes aired on Tokyo MX in Japan on Wednesdays, beginning in April 2016.

On January 25, 2017, another continuation of the series was announced during the series' 25th anniversary. In June 2017, it was confirmed that it will consist of two movies that cover the Dream arc. On June 30, 2019, it was revealed that the movie duology would have the title Sailor Moon Eternal. Directed by Chiaki Kon and written by Kazuyuki Fudeyasu, the first and second parts were released on January 8 and February 11, 2021, respectively.

On April 28, 2022, a special program celebrating the series's 30th anniversary announced a two-part film adaptation of the manga's final arc, titled Sailor Moon Cosmos. Directed by Tomoya Takahashi and once again written by Fudeyasu, the duology is set to be released in the summer of 2023.

Kotono Mitsuishi is the only Japanese voice actress reprising her role from the '90s anime, as Usagi Tsukino/Sailor Moon. The English dub (handled by Studiopolis for the first three seasons and VSI Los Angeles for the Eternal films) uses the same voice cast as the 2014 redub of the original anime.

Note: Only tropes unique to Sailor Moon Crystal should be placed here.

open/close all folders
A–D
E–L
M–S
T–Y
"The Moonlight is the messenger of Love."
Feedback

Usagi gives herself away, much to Chibi-Usa's embarrassment.

Usagi gives herself away, much to Chibi-Usa's embarrassment.