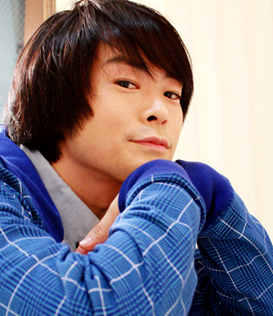 Daisuke Sakaguchi (born October 11, 1973) is a voice actor who got his debut as the Kid Hero and cute little boy Usso Ewin in Mobile Suit Victory Gundam. Since then, the cute little boy or Bishounen archetype is always a part of his roles. But he can play against type, too, especially if they are of the creepy but young variety.

As a fun fact (back in the mid-90s) he was part of the voice actor unit, EMU (Entertainment Music Unit) with Ryotaro Okiayu, Hikaru Midorikawa, Hideo Ishikawa, and Nobutoshi Hayashi. It disbanded in 2000.

Was involved in a minor scandal after fans spotted him and Ryo Hirohashi watching a soccer game together, prompting a lot of otaku Fan Dumb (magnified by the fact that they were together in both CLANNAD and Bamboo Blade), since Daisuke-san is now married.