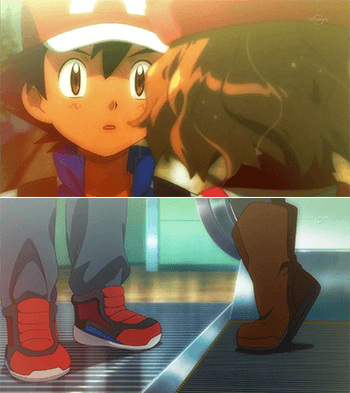 Did they kiss? Well, their lips are sealed...
Grandpa: And as they reached for each other... [stops reading]
Grandson: What? What?
Grandpa: Ah, it's kissing again. You don't want to hear that.
— The Princess Bride

So, after all the Unresolved Sexual Tension, Alice and Bob are finally going to kiss...wait, why is the camera looking away?

The Kissing Discretion Shot is what happens when a kiss is implied, but not shown directly, usually by creative camera angles or by cutting away right before the characters' lips touch.

Usually, this is done for at least one of these reasons:

See also Sexy Discretion Shot for the naughtier variant. Different from Almost Kiss where the kiss is interrupted instead of blocked.

Sanji and Pudding share a single kiss that is hidden from view before she wipes his memory of the event.

Sanji and Pudding share a single kiss that is hidden from view before she wipes his memory of the event.