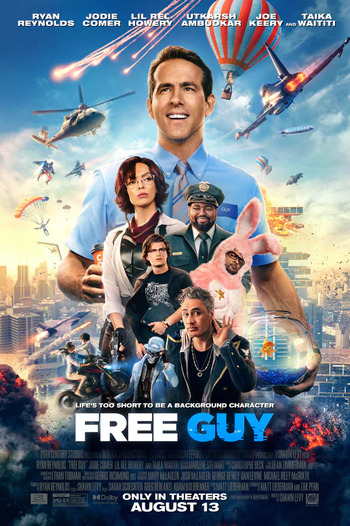 ♫ Cause it's just a sweet, sweet fantasy baby... ♫
"Guy. This world is a video game and it's full of bad guys. We need you to be the good guy."
— Millie/Molotov Girl
Advertisement:

A 2021 Science Fiction action comedy starring Ryan Reynolds and Jodie Comer and directed by Shawn Levy, Free Guy tells the story of Guy: a Non-Player Character bank teller in an online open-world video game called Free City, which is best described as a mash-up of Grand Theft Auto and Fortnite, where Player Characters (known to Guy as "Sunglasses People" for their distinctive eyewear) commit crimes and act like violent sociopaths for fun.

Guy's world changes when he falls in love with a player character named "Molotov Girl", and is motivated to stop a bank robbery instead of just going along with it like normal. In the process he takes the player character's sunglasses and puts them on, allowing him to see the game's HUD and interact with the game like a player would. He tries to catch Molotov Girl's eye, but she brushes him off as a noob and tells him to reach Level 100 if he wants to talk to her. Guy accepts this challenge, but he's unwilling to commit crimes to Level Grind, so he decides to stop them instead. Guy's level begins to shoot up and he becomes a viral sensation as players take notice of an NPC becoming a hero and fighting back against the players.

In the real world, Molotov Girl is the username of a programmer named Millie (Jodie Comer), who is pursuing a lawsuit against the publisher of Free City, Soonami Games, believing their CEO Antwan (Taika Waititi) created the game using code stolen from an indie game called Life Itself that Millie had worked on with her friend ​Keys (Joe Keery). Keys works at Soonami as a content moderator alongside Mouser (Utkarsh Ambudkar), and the two begin to investigate Guy, believing he's a player who hacked an NPC skin for himself.

Eventually both Keys and Millie discover that Guy is actually an NPC who has begun to act beyond the boundaries of his programming, a realization that has huge implications not just for Millie's lawsuit and Antwan's company, but for the concept of Artificial Intelligence itself. But their quest to prove their suspicions about Free City meet strong opposition from Antwan, who is in the process of launching Free City 2 and is infuriated by Millie's lawsuit hurting the company's reputation and Guy's popularity tanking pre-sales — and he's prepared to go to extreme lengths to put an end to them, even if it means the destruction of Free City.

The film released in theaters on August 13, 2021, and was the first Disney film to be released under a 45-day exclusive theatrical window.

According to Reynolds, Disney has expressed interest in a sequel. Until then, Reynolds and Levy would collaborate a second time on The Adam Project and potentially a third time on the currently in development third Deadpool movie.

In order to take out Dude, Guy accesses some IP from the movie's parent company.

In order to take out Dude, Guy accesses some IP from the movie's parent company.