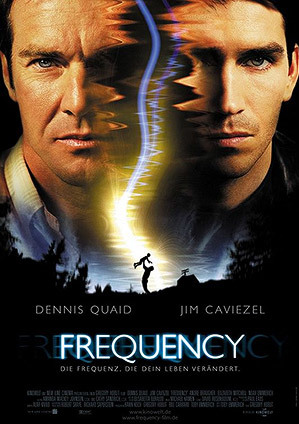 Frequency is a 2000 film directed by Gregory Hoblit and written by Toby Emmerich.

NYPD detective John Sullivan (Jim Caviezel) is the adult son of a firefighter, Frank (Dennis Quaid), who tragically died on the job when John was a child in 1969. John discovers that during the aurora borealis in 1999 he can use his father's old ham radio to talk to him exactly 30 years in the past. Using his knowledge of the past thirty years, John changes history, saving Frank from dying in that fateful accident. They soon discover that changing the timeline has drastic consequences. A serial killer known as the Nightingale Killer had died in the old timeline - but in the new timeline, John's mother, Julia (Elizabeth Mitchell), a nurse, was not called away due to Frank's death, and thus she was able to prevent the killer's death in the hospital. In the erased timeline, the killer claimed only three victims - but in the new timeline he kills ten women, one of them John's mother.

Working across a span of thirty years, John and Frank work together to stop a serial killer, who soon sets his sights on the Sullivans...

In 2016, The CW greenlit Frequency, a television adaptation of the film; John Sullivan has undergone a Gender Flip into Raimy Sullivan (Peyton List), Frank has been made into a cop just like his daughter, and the concurrent timelines are now 1996 and 2016 (only a 20-year separation). Going undercover, he was murdered under circumstances which ruined his reputation and left his widowed wife and daughter alone and confused. The rest of the plot seems to be roughly the same as the film for now, albeit with Frank, having survived his assassination attempt, looking into the who's and why's of his murder.

Not to be confused with the obscure Rhythm Game of the same name.