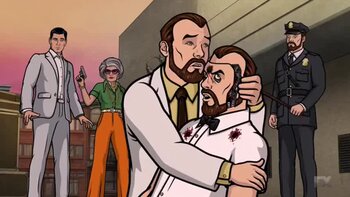 "That'll do Milkly. That'll do."
"It says a great deal about the mind of Commander Data that, looking at the human race with all its violence and corruption and willful ignorance, he could still see kindness, immense curiosity, and the greatness of spirit. He wanted, more than anything else, to be part of that. To be a part of a human family."
— Jean-Luc Picard's eulogy to Data: Star Trek: Picard
Advertisement:

Webster's Dictionary defines a robot as "a machine resembling a human being and able to replicate certain human movements and functions automatically". In real life, most robots are treated more like appliances, and when they break or become obsolete, they are discarded in favor of upgraded tech. Any tears wept over the loss of a robot IRL would typically be seen as weird and unsettling.

In fiction however, robots, regardless of the level of sapience, are treated differently. In fiction, a robot can die, whether by physical destruction, memory wipe, or any other means, and depending on the relationship they had with the other characters, their death may be viewed as comparable to losing a coworker, a friend, or a family member. In short, a robot can be humanized when it dies, and as a result it is mourned. Whether tears are shed or a funeral/eulogy occurs, the point stands that the robot is treated as an equal and given the same level of dignity and compassion that their organic counterparts would receive if they died.

This trope isn't reserved for just robots, it can also include AI's or even video game avatars.

In some instances, there are disparate reactions to the robot's death. While some may grieve and humanize the robot, others may express confusion or disdain as to why those who are mourning are grieving a hunk of metal.

A Ridiculously Human Robot will most likely get this kind of reaction from others if they die: although a robot may well be mourned even if it does not fall into that category. What matters is the relationship that the people have formed with the robot.

Some instances of this trope also have the robot come back to life, potentially leading to Tears of Joy.

Overlaps with Robosexuals Are Creeps if there was a romantic/sexual relationship between a human and a robot and the other characters are creeped out by it, and with Tragic Robot if the robot is a sympathetic character. Compare Mourning an Object, which involves characters mourning an inanimate object. Contrast Just a Machine and What Measure Is a Non-Human?.

As a Death Trope, all spoilers will be unmarked ahead. You Have Been Warned!