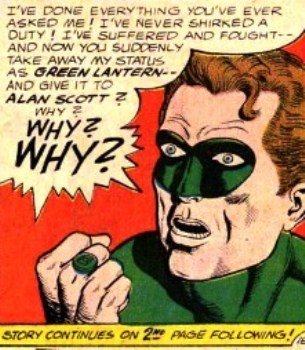 Because they hate you, I thought you understood this already.
"Why, Lisa? WHY? WHY?"
— Johnny, The Room
Advertisement:

A character is confronted with great misfortune. He is struck by bad luck at the least convenient moment, someone close to him suddenly got shot or died or he lost a precious object forever. Cue to him or her screaming the word "Why?" up to the sky in a Skyward Scream, complete with Large Ham and Narm fashion. Often a sign of Villainous Breakdown, Heroic BSoD, Break the Cutie and Start of Darkness. Might imply a Rage Against the Heavens.

This used to be a popular trope during dramatic scenes, but nowadays it's a Discredited Trope, usually played for laughs.

Not to be confused with the regionalnote Mainly Massachusetts, and Connecticut. supermarket chain "Big Y". Or Super Why!.

NOTE: Do not Pot Hole to this trope just to complain about something. It will be deleted.

In Season 8 "Are You There Bob? It's Me, Birthday", Linda has forgotten Bob's birthday and Gene has bungled bangs.

In Season 8 "Are You There Bob? It's Me, Birthday", Linda has forgotten Bob's birthday and Gene has bungled bangs.