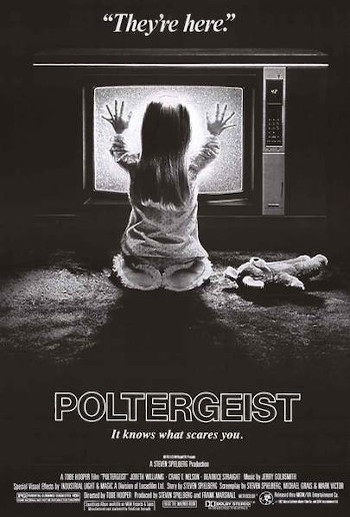 Poltergeist (1982) is a horror movie directed by Tobe Hooper and co-written and produced by Steven Spielberg, chronicling the terrifying paranormal events that surround the Freelings, an ordinary suburban family, whose home is invaded by spirits that show a special interest in their five-year-old daughter, Carol Anne.

The franchise is often said to be cursed, because several people associated with it, including stars Dominique Dunne and Heather O'Rourke, died prematurely. "The Poltergeist Curse" has been the focus of an E! True Hollywood Story. The first film is also known for persistent rumors that Spielberg directed most of the movie.

This film was ranked as #80 on Bravo's 100 Scariest Movie Moments and the Chicago Film Critics Association named it the 20th scariest film ever made.

If you are looking for a trope about mischievous ghost vandals, you can see it under Poltergeist