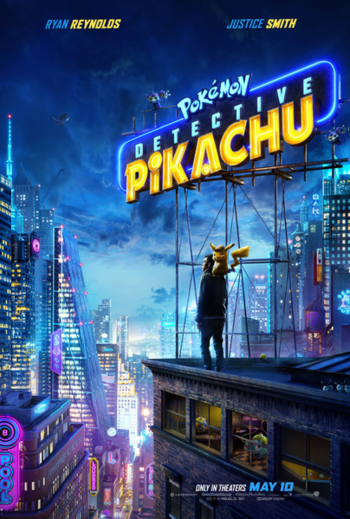 "I think we all knew I'd wind up as a miniature detective repeatedly saying the same two words.
Just didn't think it'd be this soon."
Tim Goodman: I don't need a Pokémon, period. You got that?
Detective Pikachu: Then what about a world-class detective? Because if you want to find your pops, I'm your best bet.
Advertisement:

Pokémon Detective Pikachu, often referred to as just Detective Pikachu, is a 2019 Video Game Action-Adventure film based on the Pokémon Spin-Off game of the same name, and the first live-action entry in the Pokémon franchise. The plot of the film is the same as the game: Tim Goodman, the son of a famed detective in Ryme City who has gone mysteriously missing, must join forces with a wise-cracking Pikachu in order to find his father and get to the bottom of the strange incidents plaguing the city.

The film is directed by Rob Letterman, with a screenplay based on a story by Letterman, Tom McCarthy, and Nicole Perlman, and stars Justice Smith, Kathryn Newton, and Ken Watanabe, alongside Ryan Reynolds as Detective Pikachu.

It was released on May 3 by Toho in Japan, and released worldwide by Warner Bros. on May 10. It is Warner Bros.' first Pokémon theatrical release in over 18 years, having last been involved in the franchise by releasing Pokémon 3 worldwide outside Japan, which was also the franchise’s last wide release in North America.note Warner's television outlet, The WB, continued to air Pokémon: The Series through Kids' WB! until 2006, while Time Warner (now WarnerMedia)-owned Cartoon Network aired the anime from then on until the end of 2016. It is the first in the franchise to receive any major theatrical release in North America since Pokémon Heroes.

Moreover, the movie also holds the distinction of being the first live-action movie based on a Nintendo series since 1993's Super Mario Bros., and is one of the few official live-action American-made media in the Pokémon franchise after Pokémon Live!, which was based on the anime.

A sequel was initially in development, but has been cancelled.

, "What a Pikachu World"

open/close all folders
Tropes A to G
Tropes H to Z
"There's magic that brought us together, and that magic is called hope!"
Feedback